No doubt we live in a terrorism-prone world and governments and companies alike are looking for ways to strengthen security efforts. Part 1 of a two-part series discusses attributes and testing of blast mitigation coatings.

In Part 1, we showed the strength and durability of Blast Mitigation Coatings.  Products have been scientifically tested by Missouri University of Science & Technology Explosives Laboratory and benefits are proven over and over on the battle field and in non-military applications.

The most obvious application of blast mitigation coatings is military and government security facilities.   This includes: 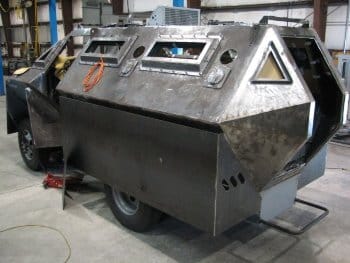 A number of commercial and private venues are also taking advantage of security coatings for more blast resistant buildings and transportation. These include:

In addition to coating building walls and vehicles, products such as blast mats are being manufactured.  ArmorThane blast material is sprayed over a special blend of polypropylene and polystyrene foam.  This creates a lightweight, portable protection for vehicle floorboards, barricades and other areas.

Concrete training bunkers for Military and Police that are sprayed with ArmorThane have proven to save thousands of dollars to facilities such as National Security Associates.  Read how these bunkers can take nearly 200 grenades before being re-coated. 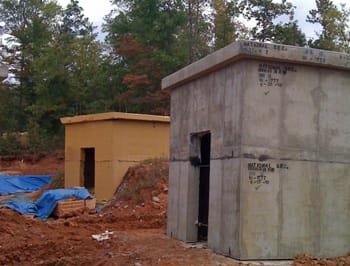 Not all dangers are due to terrorism; some facilities can be at risk for accidental explosion.  Combustible environments such as chemical plants, refineries and a variety of tank applications can benefit from safety features of these coatings.  An added benefit is the chemical-resistant and leak-proof nature of the coatings.