The protective coating industry has come a long way from boxes and brushes. Over the past 30 years, ArmorThane has finely tuned advanced polymer formulation materials that have a series of modulus (from high to low), far better fire retardancy, low VOCs, and faster response times. Today's current coatings, including polyurethane and polyurea, are amongst the most advanced resins to have ever existed. These polyureas, more than any other polymer coating, stick out in their versatility, toughness, and also longevity. They are the next step in the development of protective coatings.

At the same time, improvements in coating technology have resulted in the growth of spray, shot, and roto-cast application devices that also boosts the effectiveness of polyureas. Specifically, plural component equipment advanced technology has been enhanced to make the application process much less complicated, a lot more consistent in protection, relevant at lower pressures (reduced to as low as 1,000 psi), and also producing much less overspray or fogging.

Polyurea products have two components: the isocyanates quasi-prepolymer and also a material blend. The material blend is a mix of amine-terminated chain extenders. Unlike polyurethanes, no polyols sare employed in the production of polyurea materials. When the products are blended in the application equipment, the isocyanates and the amine resins respond to create a urea linkage.

Introduced in 1989 by the Texaco Chemical Co., polyurea was related to by many in the coatings industry as an "over-hyped" item with exaggerated characteristics and benefits. Several producers of typical coating material disregarded the claims of polyurea being the "marvel" product. Consequently, lots of manufacturers, as well as end-users, lost sight of the true benefits of polyurea.

Many old-guard coating manufacturers did not differentiate between polyurea and polyurethane. All coatings, whether polyether amines (polyurea part) or polyester/polyether hydroxyl (polyurethane urethane component) materials, were identified as polyurethanes. Just in the past seven years have numerous manufacturers separated these coatings.

Polyurea's rapid response time (5-15 secs) leaves polyurethane and epoxy products in the typical dirt. It is an autocatalytic polymer. With the quick reaction time, polyureas do not quickly respond with humidity as well as moisture in substrates, so the material can be easily used over cold or damp substrates, such as steel, concrete, wood, or PU foam. On the other hand, when smoother circulation of material is required to wet out mold or cover a complex carved surface area, polyureas (like polyurethanes) can be decreased to have gel times varying from 20-60 seconds.

Quick response time is a unique advantage of polyurea. When it comes to center upkeep or rejuvenation, owners intend to regain usage of the center as soon as possible. A fast-reacting polyurea completely cures within a few hrs. In contrast, many polyurethane or epoxy coatings call for 24-48 hrs before the covered locations can be made use of to their full possibility.

Polyurea is frequently used to protect the outside of the iron pipe, considering that the tube can be recoated "above-the-ditch" (in the field) without pricey tools. The polyurea remedies promptly and also the pipe can be virtually reburied without a split. Many pipelines all over the world, consisting of the Trans-Alaska pipeline, have used this technology to speed up production and also keep maintenance costs to a minimum.

Where dampness or humidity is a problem, polyureas surpass any kind of product on the marketplace today. Polyurethanes can be sensitive to high humidity and also moisture in a substratum. Therefore, they will react with climatic wetness or high humidity to produce carbon dioxide gas and trigger lathering and/or pinholes in the surface area. On the other hand, polyureas are not affected by moisture.

The response of Component and Component B (polyamines) or a polyurea system is so quick that the dampness response can not occur. For that reason, the polyurea systems are not sensitive to wetness as well as moisture, as well as do not usually produce carbon dioxide bubbles. This is an advantage in environments or regions with high moisture or dewpoints.

On the whole, polyureas are a more versatile protector for concrete. Recent innovations have brought about the mixing of epoxy and polyurea to develop products that are suitable for below-grade waterproofing, bridges, auto parking decks and flooring. Since these are slower healing systems, aggregates such as rock, iron or quartz flakes can be contributed to improve grip for lorries and also non-skid top qualities for pedestrians.

If a substrate is moist or has condensation on it, polyurea will certainly carry out far better than polyurethanes. Lots of in the industry were surprised when Texaco produced a video clip of polyurea being sprayed over ice and also water without affecting the reaction of the parts. This demonstration is normally not experienced in real-world applications. Using any type of coating over an exceedingly damp or unprimed/unprepared substratum can have destructive impacts on the adhesion.

Organizations such as the National Association of Corrosion Engineers and also the Steel Structures Painting Council cover standards for adequately preparing and also priming surfaces. A correctly prepared surface area will boost adhesion, particularly for critical applications such as moist concrete for containment lining and flooring, in addition to adhesion defense for geotextile, timber, and also steel. In these applications, polyurea systems will have the best outcomes.

The warm sink commonly triggers application troubles for steel substrates. Standard polyurethane systems related to heat sink substrates could compromise the residential properties or adhesion of the initial pass. No problems are utilizing a polyurea system over ready steel.

In waterproofing applications, a reduced modulus and a high prolongation elastomer are called for to fulfill the obstacle. Polyurethanes have typically been regarded as having higher prolongation and also a lower modulus than a polyurea with a comparable firmness.
However, the days of polyurethanes having a more limited modulus than polyureas are over. Modern advances in the chemistry mean polyureas are formulated to really feel as soft as well as elastic as polyurethane. This, consequently, unlocks for OEM suppliers that generate soft "vinyl-like" skins, as an example, to select polyurea. The new polyureas will stretch with a lot less force. And also, much more importantly, polyureas will certainly resist leaks and also tears similarly as intensely as polyurethanes.

The composite as well as OEM manufacture industry has seen a remarkable enter the use of polyurea as an option to unsaturated polyester vinyl esters and also polyester fiberglass for open mold part manufacturing. Automotive and also off-highway body panels, bumpers and other parts are just a few of the parts that can quickly be produced faster and without unsafe exhausts. Numerous makers in the marine, bathroom fixture and also mobile home industry can also look to polyurea as a trusted, affordable alternative to FRP systems. The low volatile material of polyurea likewise makes it very attractive for confined work areas. Several local as well as state federal government companies are cracking down on styrene exhausts. Unlike polyester fiberglass or epoxy, no fumes or styrene emissions are associated with polyurea. For that reason, polyurea is ideal for applications such as wall and also floor coatings for the food as well as beverage markets.

Until lately, manafacturers have actually been faced with the choice of closing down production or, in the case of huge companies, paying the penalties while proceeding with production in hopes there is enough earnings margin in each unit generated to maintain the company operations. Modern structural polyurea systems can provide these companies an alternate manufacturing product to eliminate federal government fines and boost earnings.

In an extremely harsh atmosphere, polyureas do incredibly well. In applications as soon as thought to call for high-solids epoxies, polyureas are winning at every turn. In the rail and also barge industry, polyureas are made use of rather due to their superior elongation and high influence resistance. Epoxies will fracture and also delaminate when revealed to constant battering.

The durability and physical buildings of polyurea have made it the system of choice for the swiftly expanding vehicle bed lining industry. Polyurea is sprayed in an uniform appearance over the steel bed surface area. And also, thanks to technologies in application devices, non-professional sprayer as well as retail applications can swiftly turnover numerous vehicles in a mid-day. Polyurea has actually shown its unique advantages over polyurethane liners.

When it involves heat resistance and also fire retardance, polyureas have the advantage over equally created polyurethane. Because of its formulation, structural/rigid polyureas have outstanding resistance to warmth distortion and also sagging. At the same time, polyurea preserves its adaptability as well as high effect resistance. This is not the case for shaped structural polyurethane components that are in constant close proximity to heat. Polyurethanes tend to droop. Polyureas stand up to warmth droop as well as maintain their form.

And when the warm is truly on, like when it comes to fire, polyureas will normally outmatch most various other polymer resins. The resulting reduced smoke and also fire spread results from polyureas' molecular structure. Revealed to continuous fire for 20-30 secs, polyurea will self-extinguish.

Lots of polyureas are based upon aliphatic isocyanate prepolymers that are very weather resistant and also shade secure. Products based on aromatic isocyanate prepolymers are not color stable and also will certainly tend to chalk or dim in shade with prolonged direct exposure. For a long time, fragrant polyurea was the primary variation of polyurea that was advertised to the industry. In the mid-1990s, aliphatic and aliphatic-modified polyureas were established. These products revolutionized the coatings business. Now end-users might securely pick a polyurea for applications that would be regularly revealed to sunlight, without the worry of discoloration and chalking.

Subjected polyurea is commonly made use of in applications such as concrete or geotextile coatings for secondary containment applications. Polyureas' rapid cure times enable it to be quickly related to a prepared substratum with limited downtime for the center. This has made polyurea the selection of center supervisors for wall surfaces around and also floorings under chemical storage space of watered-down acids, antacids, salt solution, organic solvents, and even oils. Polyurea supplies a substantial barrier to spills from getting to the setting. In this type of application, polyurea conveniently satisfies grounds, pipelines, and also projections to create a total seal. An aliphatic polyurethane or epoxy topcoat can be added for aesthetics in settings that are also very harsh for a typical polyurea.

In a world of enhancing ecological awareness, polyurea proves to be an effective and also economical choice for federal governments as well as businesses for their elastomeric and also structural requirements. Material advancements in remedy times, durability as well as fire retardancy are being made every day. Application tools, as well as spray pointer advancements, are being presented a lot more rapidly than ever to meet the demand for far better, more effective ways of getting the item sprayed in place.

In unusually harsh conditions, elastomeric polyureas are outperforming conventional paints and epoxy coatings in physical properties as well as economics. As the price of repairing and also keeping rail cars continue to climb, rail car owners and transportation authorities are looking to high-performance protective coatings to maintain their rail cars in operation as long as possible.

Usually, polyureas are understood for their extremely rapid gel times (as low as five secs) to stop ambient or surface area dampness from impacting the coatings. In these situations, the surface area of the coating has a tendency to form an "orange-peel" surface area. Nonetheless, polyurea can additionally be crafted to gel a lot more slowly. Because of this, the coating has time to drain as well as form a glass-smooth surface area.

The global polyurea protective coatings market size is projected to grow from USD 885 million in 2020 to USD 1.48 billion by 2025. ArmorThane continues to tweak their products and continue to stay on top of the evergrowing market. Stay tuned for future product updates or learn about the current product line and find the perfect fit for your current project. 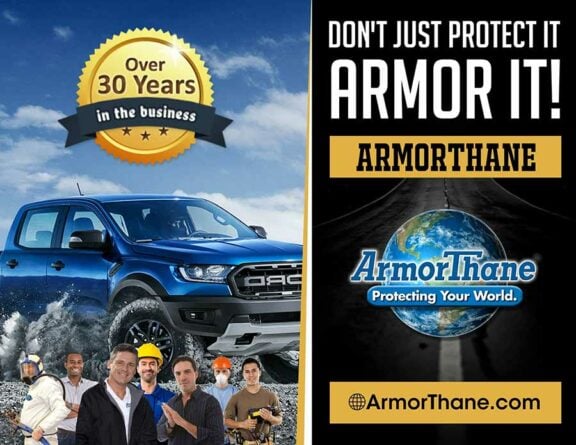