The 2002 Chevy Avalanche was introduced with a light gray plastic body cladding that was intended to provide a next-generation distinctive look and add protection in high wear areas. The 2003 model featured darker cladding, but by mid-year public outcry over problems prompted the company to offer the Avalanche WBH model (Without Body Hardware).

According to Wikipedia, the Avalanche cladding developed cosmetic issues such as a chalky, faded look with streaking and discoloration resulting from heat and sunlight exposure.  General Motors agreed to a one-time treatment using a product called ArmorDillo (not to be confused with ArmorThane).  This solution only lasted six months. Their findings also indicated that the cladding cannot be painted to a suitable finish.

The permanent solution to discoloration and other cladding damage is ArmorThane polyurethane.  This is the same material used to spray bed liners to prevent scratching and denting. Because the cladding is somewhat flexible, it’s important to note that ArmorThane also bends and stretches with the surface so it never cracks or peels like other coatings. To coat the cladding in place requires sanding and prepping with a conversion coating to ensure the polyurethane permanently adheres.  If the panels are removed and encapsulated with the spraying process, the conversion coating is not needed.

With a wide range of colors, customers can choose to match existing cladding, match the OEM body paint, or select a contrasting color.  A ColorCoat additive also eliminates future fading, even in extreme environments.

Here is one customer’s story.  Steffan’s 2002 Avalanche was side-swiped, damaging the driver side running board back to the rear bumper. A hole was gouged in the cladded running board and a piece of cladding was creased on the rear quarter panel in front of the tire.

Steffan’s first step was to remove the running board and have it repaired.  Then he had both running boards sprayed at the ArmorThane dealer, using a special polyurethane.  He realized that the rest of the damaged cladding could not simply be replaced with new pieces because the color would not match the old cladding.  Steffan looked into paint and Gatorback but had had previous problems with peeling.

After seeing the results of the coated running boards, Steffan decided to remove all of the old cladding and have the dealer spray the pieces with ArmorThane.  Unfortunately he found another problem in that there was rust underneath the cladding so the body also had to be repaired. The project had to be extended over a longer period than expected.

With polyurethane, there is no issue of fading so the restoration could occur as time and resources permitted. Steffan was particularly pleased with the durability and textured finish of the coating. When he was at a baseball game, the Avalanche’s newly-finished rear quarter panel took a direct hit from a foul ball. To his surprise there was no damage.

ArmorThane polyurethane maintains the “Avalanche look” but is much tougher.  We nicknamed it “Armorlanche”. 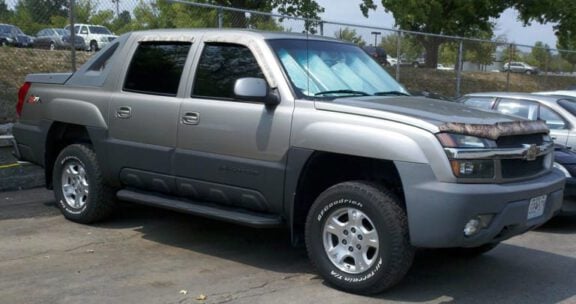